On the Stormy Waters 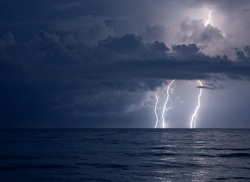 Even experienced fishermen shuddered when the wind howled out of the mountains and onto the sea. Then the waves became choppy and unpredictable; men who worked these waters all their lives knew to haul their sails and make for harbor. But sometimes-and this night was one of them-the high seas and gusts would not permit the sailors to gain the shore.The small boat circled the middle of the sea, an eerie spot, wild, unsettled, dangerous-and according to some reports-haunted. In watery graves below lay hundreds, if not thousands, of the sailors' fellow fishermen waiting for them to join them, their boats reduced to waterlogged splinters, their bones picked clean by the same denizens of the deep they had come to harvest.By three o'clock in the morning, as a false dawn dimly lit the sky, the men had been pulling on the oars for hours against the wind. No nearer shore, shelter, or sanctuary, exhaustion was setting in. And then one man caught a glimpse of something unsettling on the seas. For a few moments, a trough obscured his vision, and while he waited for the lift of the next wave, he pondered whether he was seeing things. When the wave lofted them upward, he looked steadily over his shoulder. There it was again!

He gave a shriek of terror and pointed as a curl of water again swallowed the boat. "What?" someone shouted about the wind's howl. His question was answered as the boat crested the wave; every man in the boat saw the phantom, a dead man risen from the deep, walking on the water toward the boat. "A ghost!"
It was true, then! The sea was indeed haunted-and unless God spared them by some miraculous means, they were all going to die. Gripped by terror, they rowed frantically, their strokes uncoordinated, panic-stricken, and fruitless. Each wave revealed a truth more horrible than the last: The ghost was gaining on them.

Then a Voice rang out over the storm: "Take courage, men! It's Me! Don't be afraid!"

he men paused mid-stroke and stared at one another, eyes wide with fear and hope. The voice sounded like Jesus, but how could it be Him?
This creature was walking on the water! It could not be a flesh-and-blood man. "It's a trick!" someone hissed. "The ghost mimics the voice of the Master!"

A man of action, Peter could not sit in the boat and wait to see if it was a demon approaching or their Savior. He would go to the Master-or drown in the effort. "If it is You, Lord," he shouted, "tell me to come to You on the water."

"Come!" rang out the Voice above the roar of wind and wave. Peter threw his leg over the stern.

Peter shook off his brother and stepped out. Although he had developed sea legs as a toddler, he still needed to adjust to the rise and fall of the stormy waves. Nevertheless, Peter was filled with a wild exhilaration.

Sometimes he could clearly see Jesus walking toward him, sometimes not. True dawn was not far off now, but the wind off the mountains grew stronger.

The waves dashed higher, wilder, more unpredictable; engulfed among them, Peter totally lost sight of the Master. "Jesus?" he called. He scanned the undulating swells, but for all he could tell, he was alone. He looked behind him for the boat, but it too had disappeared. What am I doing out here? he asked himself, suddenly doubting his sanity. This must be a madman's nightmare! There was no Jesus on the sea. I am alone and a fool!

Immediately, he began to sink, water washing over his head, filling his lungs. He coughed violently, but he had only enough breath for a whisper.

"Lord! Save me!" he cried out hoarsely, flailing wildly, foaming whitecaps rolling over his head.

The wave dropped, and instantly Jesus was there. His warm hand caught Peter's shivering arm and pulled him out of the pounding surf. "Why did you doubt?" Jesus asked him.

At that moment, his hand held tight and warm in Jesus' hand, Peter didn't know why either. Now, with Jesus' strong arm around him, the heaving waves were nothing but a nuisance. They stepped over each wave until the boat came into view. The men were still wildly and fruitlessly wielding the oars, so Jesus and Peter was able to come within a dozen yards before they were spotted. Then the men watched their approach, stunned and disbelieving, right up to the moment when Peter and Jesus stepped over the rocking gunwale. Immediately, suddenly, even before they were seated, the wind died. The once restless sea lay smooth and shining as the first blush of the sun's rays tinted the sky.

Are you ready to say Yes to Jesus, if so, CLICK HERE.

When you are battling a storm…

…look for Jesus in it. He's there somewhere, and if you can tear your eyes off the waves, you'll spot Him coming to your aid.

…worship Him as Master of the Sea. If all you look at is the storm, it becomes your focus, the thing of utmost importance to your mind. But if you worship Him as God, you will find that God does indeed dwell in the praises of His people.

…do what Jesus says even if He commands you to get out of your safety zone, leave your security, and walk on the water. If He says you can do it, do it.

. . .keep Jesus in your vision. No matter how big the problems are that are approaching you, no matter how threatening they appear, keep Him in your sight. If a problem temporarily eclipses Him from view, don't assume that He's abandoned you. He's still there - even when you can't see Him.

. . .if you get into waters over your head, call for Jesus' help. He'll be there.

. . .walk with His hand in yours. Cling to Him. He's promised to never leave or forsake you. He understands storms and how to deal with them.

. . .when He is walking with you, impossible feats are suddenly possible; but don't forget that it isn't you, your righteousness, your faith, or anything else about you that makes them possible-it's only the saving grace of Jesus.

. . .expect that He'll bring peace. Jesus is the Prince of Peace. When you invite Him to reign in your life, He automatically brings peace.